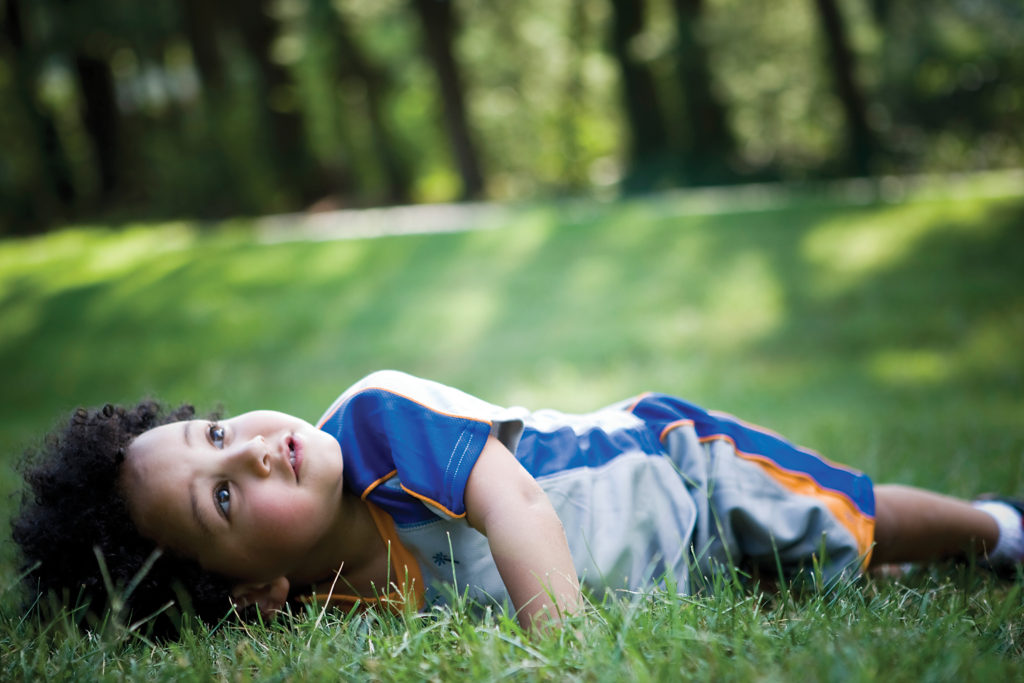 You regulate your own temperature by sweating when you are hot and by shivering when you are cold. is process is called thermoregulation. During pregnancy, your body keeps your baby’s body temperature fairly constant, independent of the outside environment. Once your baby is in the world, however, it is up to her body to regulate its temperature. At first, she needs your help to do this.

In infancy, your baby’s ability to regulate her body temperature is limited. As a newborn, she cannot move very much, and she only has active sweat glands in her head, neck, hands, and feet. Her main source of heat production is her body fat, which requires extra oxygen and glucose. Uncomfortably cold temperatures put stress on her system. If she seems chilly, dress her in warmer clothing such as footed pajamas or a sleep bag. On the other hand, overdressing your baby or keeping your home’s temperature too high can cause her to overheat. Check regularly to make sure she does not become too hot or too cold.

When I was living in Japan, [my daughter] Emi’s obāsan (grand- mother) sometimes took care of her. Even on the hottest summer days, she wrapped a towel around Emi’s belly before she went to sleep. According to cultural tradition, my mother-in-law believed that Emi’s hara, or belly, was her body’s energy center—the source of chi and the center of her being. (The location of your baby’s hara is two baby-size finger widths below her belly button and two finger widths inward.)

This area, known as the relationship chakra, is connected to the passion for life. Obāsan wanted to keep Emi’s belly warm in order to keep the temperature of her whole body warm, to allow all her organs to function well, and to allow her blood to flow smoothly. Eventually, obāsan gave Emi a hara-maki, a stretchy band of cotton fabric to wear around her middle. It was similar to the hare-obi that I wore during pregnancy.

In addition to being a social and cultural concept in Japan, the practice of keeping the belly warm is central to East Asian medicine. If Emi’s belly became exposed while we were socializing, a friend or relative would often unconsciously reach over and gently cover her belly with clothing. Samurais wore hara-makis beneath their armor. I once saw a construction worker wearing his wool hara-maki on a hot, sunny day.

My experiences in Japan led me to keep my children’s middle regions warm and covered all year long. I brought several hara-makis back to the United States with me and put them on both Emi and Mari during winter months and when they had a cold or fever. When Emi or Mari did not feel well, their father, Naoki, also made sure their feet were covered. He often said, “Warm feet, cool head.”

Central heating can be drying for your baby’s nose; it can cause the mucous membrane lining her nose to harden. is, in turn, blocks her nasal passages and makes it difficult to breathe. She will most likely be comfortable if you keep the thermostat set between 65°F and 68°F. In addition, you can use a humidifier to add moisture to the air in the room where she sleeps.

Along with a well-regulated temperature, fresh air is an integral part of your baby’s physical development. When she breathes, oxygen fills her body and brain and stimulates her growth, so the air she breathes needs to be as clean as possible. In indoor environments, be aware of substances that release toxins that can interfere with growth and may contain hormone disruptors, such as cigarette smoke, fragrances from laundry detergent, fabric softeners, scented hand lotion, perfume, makeup, incense, room fresheners, potpourri, and mothballs. To keep harmful toxins to a minimum, remove these substances from your baby’s environment, vacuum frequently, and allow air from the outside to enter your home.

Indoor environments can also produce electro-magnetic stress—low-grade tension that comes from prolonged exposure to electromagnetic fields emitted from electronic devices such as televisions and computers. Even when your baby is a few months old, she can benefit from spending one to two hours outside in the fresh air each day. With an infant, make sure the temperature outside is at least 60°F. Older children can enjoy three hours or more a day outside. A natural environment with fresh air can be relaxing and calming to your child’s nervous system—and to yours, as well.