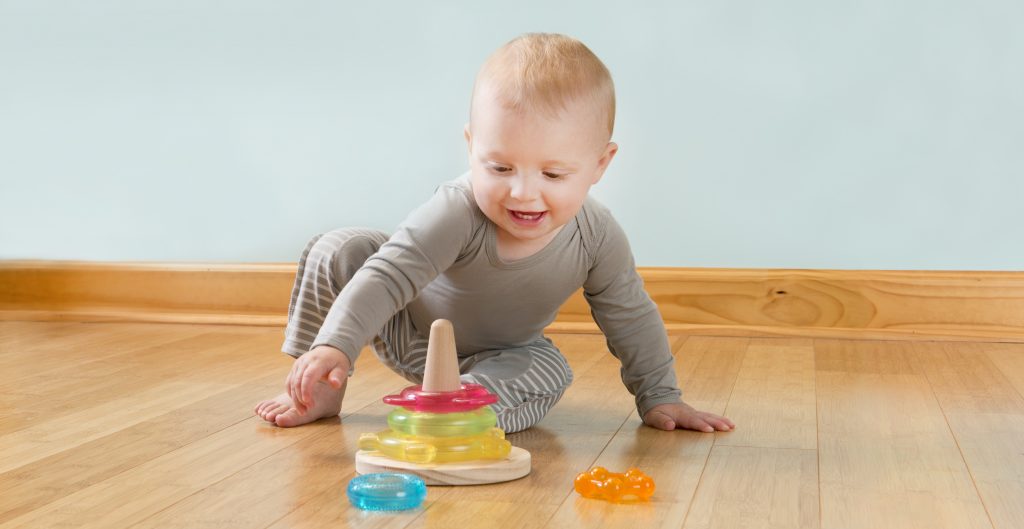 In her first few years, your baby progresses from reactivity to intentionality—from instinct to thought, from reactive expression to language, and from reflexive movement to deliberate grasping and walking. Her ability to reach her cognitive potential depends on both the knowledge she gathers from her experiences and her ability to use that knowledge, which is influenced by her confidence and belief in herself.

Physically, your baby’s brain grows to 60 percent of its adult size by age one, reaches 80 percent by age two, and is nearly at adult size by age five (though it will not reach full physiological maturity until she is in her twenties). She was born with almost all the neurons she will ever have, although those neurons have few connections between them. Before she was born, she acquired some knowledge by making neural connections through her senses of touch and taste in the womb. Then, beginning at birth, new neural connections have increasingly given her knowledge that helps her adapt and thrive in her environment. The more opportunities she has to gather information, the more connections she makes, and the more knowledge she obtains.

In the beginning, your child makes neural connections through sensory experiences. As her connections multiply, they form networks that build on previously gathered information and coordinate her thoughts. Repeated experiences strengthen her connections and create neural pathways that allow her to perform routine tasks quickly. For instance, picking up a cracker and eating it may be a challenge when she is first learning. Through repetition, however, she establishes a neural network for picking things up and putting them in her mouth. Now she can pick up a cracker and eat it without thinking.

To support her in using the knowledge that she takes in, your child needs both a large quantity of experiences, as well as high-quality experiences. As your baby builds neural networks, she also prunes unused neurons. This pruning process unclutters her thinking and keeps her brain from overloading. Due to pruning, rare or one-time experiences fall away and routine experiences become primary to her thought processes. As long as she is learning from positive experiences, the combination of forming neural networks and pruning unneeded neurons keeps her brain functioning well. However, if her early experiences are negative, frustrating, or limiting, the same combination can stunt her intellectual growth.

Plasticity is the ability of your baby’s brain to change in form and function as a result of input from the environment. During early development, her brain has the most plasticity, meaning it is both the most vulnerable to harm and the most capable of recovery. While the mind is malleable and capable of new learning at every age, unlearning takes more effort than learning does—especially when ideas or habits are formed at a young age. Think about false viewpoints or aspects of your self-image that you learned in childhood. Even if you know they are not true today, you may still be vulnerable to them. Positive and negative early experiences can play a significant role in forming your child’s perspective, for better or for worse.

Your child draws confidence from the sense of security that comes from a healthy attachment. For her to thrive intellectually, to believe in herself, to succeed, and to reach her full potential, she needs your love, your attention, and a stable environment.

You can observe and measure concrete changes in your child’s physical development, and her emotional expression has landmarks that you can quantify fairly easily. Changes in cognitive development, however, are more qualitative than quantitative. Even after your child learns to talk, you may wonder what is going on in her mind and how she processes information.

A basic understanding of stages and milestones in your child’s cognitive development can help you support her current skills and prepare her for her next stage. Keeping in mind that each child moves at her own rate, these markers can also be useful in helping you determine whether your child is on track developmentally and alerting you to any signs that you may wish to discuss with your health care provider.

Here are some of the general developmental stages in your child’s cognitive growth.

Earlier and faster mental development is not necessarily better. Each stage builds on the last, and in order to attain certain cognitive skills your child’s brain needs time to mature physically. Monitor your child for indications of delayed development, seek guidance if needed, provide love and security, and trust her brain to develop at its own pace.